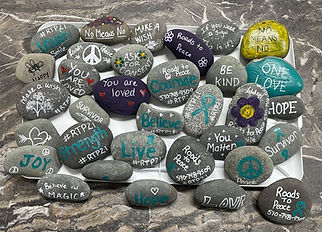 This April to highlight Sexual Assault Awareness Month we are launching a #rtp21 Awareness Rocks! Campaign.

If you find rock from Loganton to Renovo, PA and all places in between in Clinton County…take a picture and post it on social media (Facebook, Twitter, Instagram, etc.) with the hashtag #rtp21 and tag Roads to Peace.

Let’s see if we can raise awareness of sexual assault in our area by finding and posting as many rocks as we can. Please keep your found rock as a reminder or place at another location to keep the message going.

April 2021 marks the official 20th anniversary of Sexual Assault Awareness Month — but did you know we can trace its history even longer?

Even before its official declaration, SAAM was about both awareness and prevention of sexual assault, harassment, and abuse. Looking at the history of the movement to end sexual violence, it’s clear why: It’s impossible to prevent an issue no one knows about, and it’s difficult to make people aware of a problem without providing a solution. The two work in tandem, and they always have. From the civil rights movement to the founding of the first rape crisis centers to national legislation and beyond, the roots of SAAM run deep.

Roots of the Movement
As long as there have been people who care about making the world a better place, there have been individuals advocating for sexual assault prevention. In the United States, movements for social change and equality began to gain traction in the 1940s and 50s with the civil rights era. Although open discussion of the realities of sexual assault and domestic violence were limited at these times, activists for equal rights began to challenge the status quo.

Efforts during this time were championed by Black women and women of color. Advocates like Rosa Parks worked at the intersections of race-based and gender-based violence (a framework that years later in 1989, advocate and professor Kimberlé Crenshaw would call “intersectionality”).

Wide social activism around the issue of sexual assault continued into the 1970s, bringing with it support for survivors and heightened awareness. The first rape crisis center was founded in San Francisco in 1971, the same city where the first U.S. Take Back the Night event was held seven years later.

The following decades mobilized survivors and advocates to call for legislation and funding that would support survivors, such as the Violence Against Women Act of 1993 (VAWA).

Monumental changes like VAWA demonstrated that national efforts promoting sexual violence prevention were needed. Even before SAAM was first nationally observed in 2001, advocates had been holding events, marches, and observances related to sexual violence during the month of April, sometimes during a week-long “Sexual Assault Awareness Week.”

In the early 2000s, the primary goal of SAAM was awareness — both raising visibility of the teal ribbon and the meaning behind it. By the mid-2000s, SAAM incorporated prevention more heavily, focusing on areas such as communities, workplaces, and college campuses. These campaigns discussed ways that individuals and communities can stop sexual assault before it happens by changing behaviors and promoting respect.

In more recent years, SAAM has focused on bringing in audiences beyond advocates — those who may not realize they play an important role in preventing sexual violence. Recent resources have focused on how people like parents, faith leaders, and coaches can become agents of change, while sharing the practical things each of us can do to prevent sexual assault.

The Future of SAAM
The history of SAAM has shown us that, no matter what, those who want to end sexual assault and abuse will always find ways to advocate for awareness and prevention. Looking forward, we can be sure that SAAM will continue to grow and adapt, reaching even more audiences with the message that a world free of sexual assault and abuse is possible.

WE CAN BUILD SAFE ONLINE SPACES.
Sexual harassment, assault, and abuse can happen anywhere, including in online spaces. As we connect online, we can learn how to practice digital consent, intervene when we see harmful content or behaviors, and ensure that online spaces — whether they be workspaces, classrooms, social media platforms, or otherwise — are respectful and safe.

The internet has become the new public square where we connect with romantic partners, friends and family, co-workers, and strangers alike. From dating apps, virtual meetings, chats, video calls, and interactions on social media, most communication now takes place through screens.

These examples represent just a fraction of the ways that consent and boundaries can be violated online. Some acts are identified as criminal under the law, others violate policies put in place by online platforms (like Zoom or Instagram), while other acts of sexual violence online remain unnamed problems. Sometimes the violence is initiated online then takes place in person, and in other instances, the violence takes place entirely behind screens. Even though the abuse occurs behind a screen, the impact on the victim, their loved ones, and the community can be just as harmful as sexual violence committed in person.

​Sexual violence is an umbrella term that includes any type of unwanted sexual contact — either in person or online — including sexual assault, harassment, and abuse.

​Just because these forms of sexual abuse take place behind a screen doesn’t make their impact on the victim any less real. While some of these behaviors are crimes, particularly any that involve sexual abuse of children, others are just as harmful. Additionally, as images of abuse could be reshared and recirculated on the internet, there is an added layer of revictimization.